I have Flash on my iPhone 4

This is what I have been dreaming, stressing, theorizing, complaining, and optimistically waiting for. The Flash plugin on my iPhone is equal parts better than expected and needs some work.

This solution I’m told works on an iPhone 4, which I have, iPhone 3GS, as well as the iPad! I have only tested an iPhone 4.

First, I’m going to explain how I have the Flash 10.1 plugin on my iPhone. And before you ask, no this isn’t some crazy server in Mexico that converts Flash to HTML5 on the fly or an app that converts Flash to Objective-C. This is a plugin that is installed in my iOS Safari browser. Just like regular old Flash.  The difference is this is an alpha release by a person - not Adobe proper. So it’s a little buggy. Frash is a very, very alpha port of Flash 10.1 designed for the iPhone. The software comes from Comex, the same hacker who brought you the Spirit jailbreak and the JailbreakMe.com website, among other things.

It’s super duper easy to install, once you get past the first step. My list appears to be a lot of work, but it only took me a few minutes of mindless button pushing. You don’t need to know anything technical.

How to get Flash onto your iPhone or iPad.
Note: proceed at your own risk. Neo-Pangea can not be held liable if you brick your phone.

Poof. You did it. But what did you do? Your phone doesn’t look any different.

What you will see:
Visiting a page or site with Flash content will display a gray box the reads Flash. It won’t load the Flash content unless you request it. Cool, right? This is, as long as the site doesn’t already have a script to detect for iPhone or iPad (two of the very few devices which do not natively include Flash). 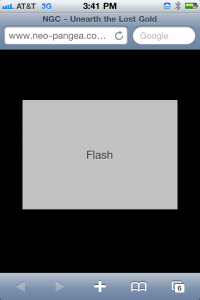 Let’s check out some examples...

Timeline Animation:
Test site: http://clients.neo-pangea.com/deardorff/logo_animations/boat.html
This was amazing. It was like I was watching a video without any buffering or opening a new window with player controls. This is what I’ve missed on my phone... The ability to view the flourishes and small detail motion graphics that Flash can do so well. All as part of the overall experience. 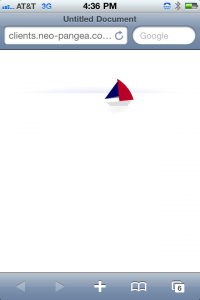 Interactive Flash Site:
Test site: http://www.falknerevans.com
The entire Falkner Evans musician site loaded, displayed, and performed great! The transitions displayed elegantly and the music is playing normally. The experience is almost identical to the normal browser site except for the fact that I’m have trouble with the touch interface accepting by mouse click events. I touch a navigational item and it’s not sure if I’m rolling over or clicked. This is something that could easily be addressed in the plug-in. First click could be over, second click as a hit. Site looks great. 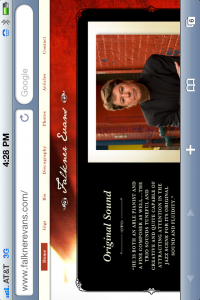 Flash Video:
Test site: http://areyouatownie.com/
This movie website is almost 10 years old. It’s the first example I could this of that had a Flash video embedded in an HTML site. The video played back very well and had no stuttering or performance issues. There was a weird scaling issue that I saw when I zoomed in. In fact, whenever I zoomed in, the video scaled down. It was like it was toying with me!  This left me wanted to try a larger video. 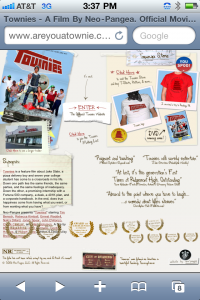 Large Interactive Video:
Test site: http://www.worthforwomen.com/
This Flash interactive produced in partnership with Influence Interactive features multiple large, high bandwidth videos - some overlapping one another along with animated transitions and effects. Guess what? It worked great. Seeing the animated pre-loader got me really excited. OK, I’m a dork. I have been cursing Apple for not having Flash since I got my first iPhone. This is like, my birthday wrapped in an awesome New Years Eve /slash/ Halloween party. Anyway, the pre-loader loaded the scene and the first video played very well! It was a little choppy but still functional. After the intro I clicked on another woman and watched her video. It worked equally as well. (note: I visited this site later and got a netStream error in the plugin) 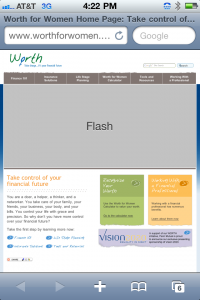 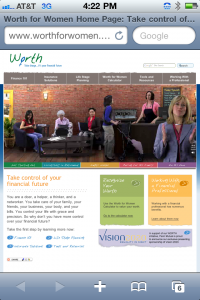 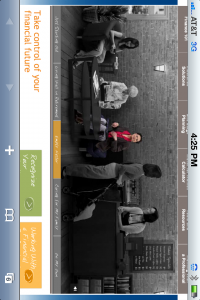 Papervision Game:
Test site: http://clients.neo-pangea.com/natgeo/ussmacon/
Yea, what was I thinking? A few text sites didn’t load the PaperVision objects at all. I wasn’t surprised. After all, PaperVision is a high processor 3rd party code set being loaded onto a tiny hand-held computer via another 3rd party plug in. Surprisingly, our 3D USS Macon game loaded! The alpha channel for the airplane graphics aren’t rendered properly, but you can see our high polygon PaperVision blimp model in the background. Unfortunately, the game uses keyboard commands so I couldn’t play it. :( oversight on my part. 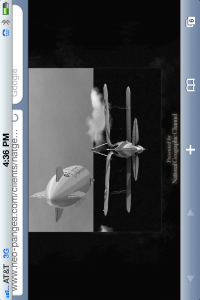 Complex Math and Processing:
Test site: http://clients.neo-pangea.com/natgeo/knownuniverse/
In 2010 we created an interactive solar system builder to promote the show, Known Universe on the National Geographic Channel. The application is processor intensive and involves a ton of math. Basically, you're creating your own working solar system using real physic equations with gravatational pulls, mass, acceleration, etc - hell, you can even create life on one of the plants if you play your cards right. All that said, I expected a big fail. I was wrong. It worked! Admittedly is was hard to use the slider tools when the iPhone thought I was trying to slide the screen - not the tool. And the rendering wasn’t zippy. But damnit, it worked!! I chose a sun, added a planet, and performed a simulation! 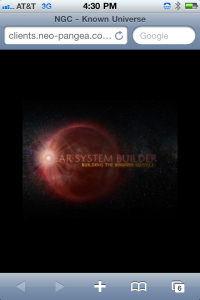 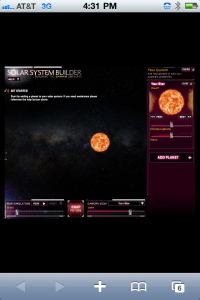 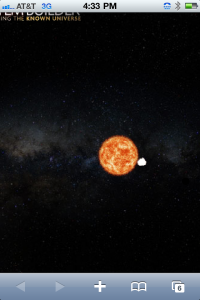 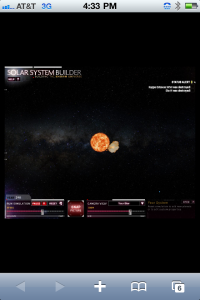 Final words...
Totally impressed with the hardware in this phone as well as the developer who brought us Frash. The plugin needs to work out it’s bugs and Jobs needs to give people what they want, not force his dogma and his AppStore. Flash, when used properly, works great on an iPhone. No, you can’t do everything you could on your computer and well, that’s ok. I’d rather something than nothing at all.

So you just finished your awesome design for your Flash project using Photoshop.  You have tons of layers (named I hope) which are a beautiful array of layer groups, adjustment layers, and oh yes, blend modes. Blend modes…
Continue Reading 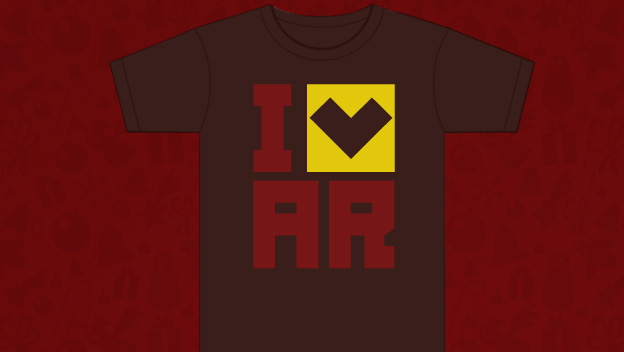 Turns out that everyone's Holiday spirit is a creepy guy in an elf costume... We mailed a handful of lucky people a special T-shirt and an instructions card. They were instructed to put on the shirt, turn on their webcam,…
Continue Reading 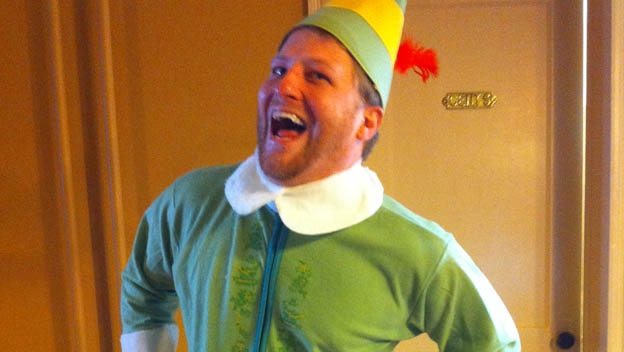 Elf for a Month

Phil ends up having to wear an elf suit for the entire month of December! Revel in Phil's pain and suffering on Neo-Pangea's Facebook page. We'd ask you to send him a note of encouragement, but we are pretty sure he likes…
Continue Reading