Behind the Comp: Beast Hunter

The show follows Pat Spain, nephew to legendary chronicler of the unexplained Charles Fort, on his global hunt for mysterious creatures like the Orag Pendek, Mapinguari, Mokele Mbembe, Caddy, and the Mongolian Death Worm. We proposed building 5 uniquely immersive and panoramic environments to allow visitors to hunt each beast featured in the series.

For National Geographic Channel's new series Beast Hunter, we were awarded the opportunity to develop an interactive experience to allow a visitor the learn more about the mythical animals and environments which are showcased in the series. The show follows Pat Spain, nephew to legendary chronicler of the unexplained Charles Fort, on his global hunt for mysterious creatures like the Orag Pendek, Mapinguari, Mokele Mbembe, Caddy, and the Mongolian Death Worm. We proposed building 5 uniquely immersive and panoramic environments to allow visitors to hunt each beast featured in the series.

The visitor would be able to pan and zoom through exotic locals such as Sumatra, the Amazon, the Congo, Northern Canada, and Mongolia. Designing the 3D environments created our first challenge.

We are always provided great reference materials from Nat Geo, as well as the episodes themselves, but rarely are we able to utilize those assets to create the detailed comps for the interactives. We needed to not only create these 5 lush environments, but also layer multiple levels of photography for each scene like a pop-up book.  Each layer would move independently to create a sense of depth.

We thought it may be worthwhile to walk through our process and show a comp outside of the interactive framework at full scale and break out the layering structure.

As you can see the size of the comps is much larger than the interactive in which it is housed. This enables us to do some interesting user controlled camera movement within the environments and give the scenes depth. When developing these environments we always start with a base image. This image serves as inspiration for the rest of the scene. From there we search for or create other images that compliment the base image. For the Orang Pendeck beast we were provided with some great secondary assets but we didn’t have that perfect image we could use as a starting point. We needed a dense panoramic jungle without too many foreground elements.  We came up short in our stock hunt and then I remembered I had taken some multi-image panoramic scenes with my 7D while in Costa Rica. Luckily, one of the image groups was perfect once it was stitched together.

Once we had the base image we needed to break it up into a few layers so that when we moved the camera through the scene the integrity of the environment stays intact. The camera control in these scenes allow the user to move left, right, forward and back.  When creating comps that will be used in this fashion it is important to work from the background plate forward since we are using flat 2D planes offset in Z space to create a faux 3D scene. Doing this will ensure that there are no holes in the scene when the user moves through it. This image worked so well we really only needed to add a few other mid and foreground elements to complete the scene.

Here you can see the layer structure. The blue area represents the visible background plate when fully zoomed out. The 2 bottom green areas are pieces of that background plate that were separated out as mid-ground layers to give that plate more depth. Since they are made up of elements of that base plate we needed to do a little cloning in Photoshop to ensure we do not see those items behind themselves when the camera moves. The top green, yellow, orange and red areas are all foreground items that were added to give the environment more depth and complete the scene. This comp isn’t nearly as complex as some others we have done (Aftermath utilized over a hundred images to create 1 comp) but as in any successful composition it isn’t how much you add, it is knowing when to stop, or possibly take away.

Click here to check out the final interactive, Beast Hunter: Join the Hunt!

Managing Your Flash Project with UML

Realizing your Inner Geek For years I have planned and quoted many Flash applications for my job as a Flash Developer.  A few months ago I was planning one of these guys.  I was mapping out flowcharts and diagrams with great…
Continue Reading 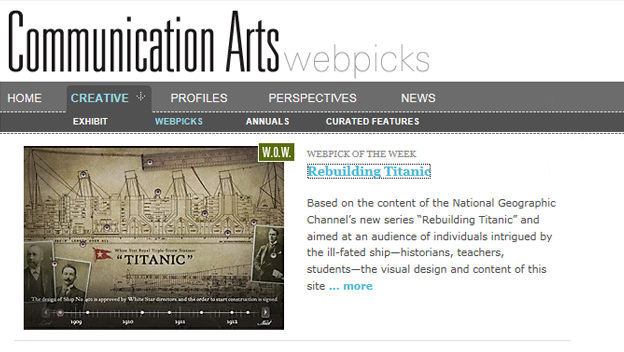 We're honored to have the 'Rebuilding the Titanic' interactive featured as Communication Arts Webpick of the week! It's a great write up from one of our favorite magazines. Thanks Comm Arts!!
Continue Reading

Pushing my Buttons - Multiplayer Madness in Flash - Part I

Flash your FriendsSo one issue that has always chapped my hide with Flash is multiplayer, and I think the main reason is Flash Media Server.  It's like that girl at the middle-school dance that you want to talk to but you…
Continue Reading